Across the nation, cities are investing in bicycle and pedestrian infrastructure to promote active transportation options. Recent expansions of bike share programs, street improvement projects, and investment in recreational paths and trails are a few exciting changes which not only provide improved day-to-day transportation options, but also fun and easy ways to improve personal health and fitness. Bicycling and walking bring numerous environmental benefits to cities and communities, including decreased traffic congestion, air pollution, and reductions in noise generated by vehicular traffic.

The Alliance for Biking and Walking, 2012 benchmarking report provides a positive outlook of bicycling and walking trends in the United States. Nationwide, walking and bicycling rates have increased over the last decade and now comprise 11.5 percent of all trips.

However, despite efforts to increase bicycling and walking through initiatives such as Complete Streets and Safe Routes to School programs, New Jersey lags behind the national average for the level of bicycling by residents as a means of transportation. The report states that only 0.3 percent of New Jersey residents commute by bicycle, compared to the nationwide average of 0.6 percent[1]. 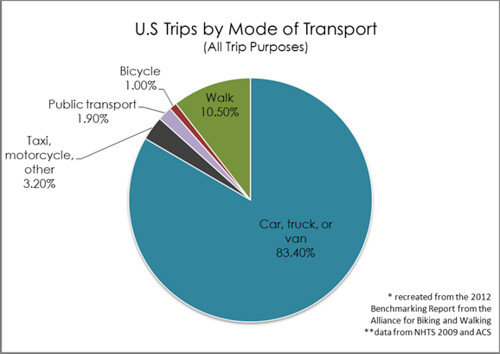 The graph above depicts all travel trips by mode of transport in the United States. While approximately 10.5 percent of all trips are made by walking, only 1 percent of trips are made by bicycle. Unsurprisingly with extremely high rates of automobile usage across the nation (83.4 percent), both children and adults are not meeting recommended levels of physical activity. In fact, nationwide, only 36 percent of children meet doctors’ recommendation for physical activity. With gym class and recess being cut in approximately 40 percent of public schools, designated time for physical activity and play is increasingly rare[2]. Incorporating bicycling into daily commutes for children and adults is a great opportunity to automatically build in physical activity into a daily routine, that can also be a fun, recreational activity. 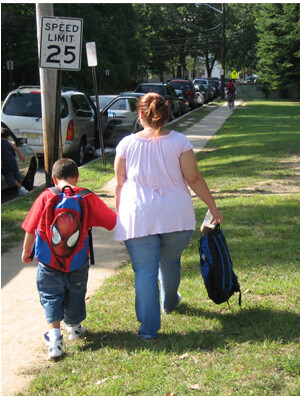 Since 1980 the prevalence of obesity among children and adolescents has almost tripled. Approximately 17 percent of children and adolescents are obese, and more than one third of all children and adolescents are overweight or obese[3]. This increase in childhood obesity is having devastating impacts for children across the nation; this generation is the first generation projected to have a shorter lifespan than their parents. By 2020, obesity will reduce life expectancy by an average of 13 years. The evidence of more sedentary lifestyles and decreased physical activity is clear; between 1960 and 2000, obesity levels increased by 241 percent, while levels of bicycling and walking fell by 67 percent[4].

In the state of New Jersey, 62 percent of adults are overweight, and 24 percent of adults are obese[5]. The ramifications of unhealthy lifestyles are tangible and stark. In adults, obesity-related conditions are some of the leading causes of death, including heart disease, stroke, type 2 diabetes, and certain types of cancer. In 2008, medical costs associated with obesity were estimated at $147 billion[6]. Furthermore, obesity is the number two cause of preventable deaths in the United States, second only to tobacco use. 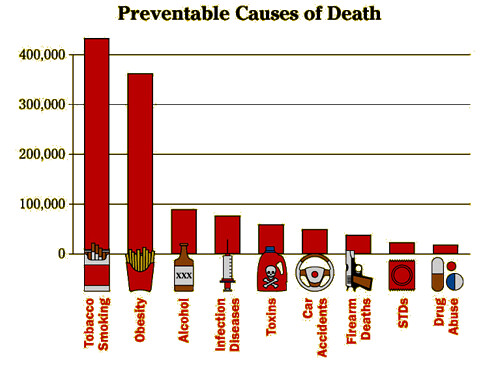 Current public health guidelines recommend that adults get at least 30 minutes per day of moderate intensity activity; this level of activity has been shown to significantly reduce the risk of numerous chronic diseases among all people—including those who are overweight or obese, regardless if weight loss occurs[7]. Multiple studies have demonstrated a positive relationship between bicycling and improved health for both children and adults. Bicycling is a beneficial physical activity as it taxes the cardio-respiratory and metabolic functions of the body[8]. Moreover, because bicycling can be done at a range of different intensities it is an accessible activity for the entire family.

Additional studies have confirmed that physical activity increases cardiorespiratory function, decreases risk factors for disease, and reduces the risk for all-cause and cancer mortality[9]. More specifically, studies have shown a negative correlation between levels of high blood pressure and bicycling and walking. Similar health improvements in children have been found as well, including increases in cardio-respiratory fitness and decreases in disease risk factors[10].

The built environment and behavioral change are key aspects in increasing levels of physical activity and encouraging healthy lifestyle choices. Making changes to neighborhoods and providing space to exercise, play, and bicycle, is an integral part of promoting healthy lifestyles. Many studies have demonstrated the link between the built environment and levels of daily physical activity. In fact, people who live within walking distance of urban parks are reported to be nearly three times more likely to get the recommended amount of daily physical activity. Similarly, more walkable neighborhoods and access to parks are correlated with higher levels of physical activity and lower body mass index in both adults and children[11].

A recent study analyzing bike paths and lanes in 90 cities across the U.S shows a positive correlation between the quantity of available bike paths and lanes and levels of bicycling, even while controlling for other relevant factors such as gasoline prices, safety, and compactness of land use[12]. An additional study confirms the importance of bicycle infrastructure, asserting that each additional linear mile of bike lanes per square mile of the city is associated with an increase in the share of bike commuters[13]. Investing in bicycle infrastructure and other supportive programs such as Complete Streets and Safe Routes to School, are key components to increasing levels of physical activity.

In addition to improvements in the built environment and access to open space, behavioral change is important in promoting healthy lifestyles and increasing physical activity. Wellness campaigns and educational programs are two ways to help support permanent lifestyle changes. The “Let’s Move!” Campaign is a nationwide program dedicated to educating citizens and improving public health. Launched by First Lady Michelle Obama, the “Let’s Move!” campaign is an effort to solve the challenge of childhood obesity. The program is a comprehensive initiative that reaches out to all members of the community—parents, government officials, community organizations, healthcare professionals, private companies, and faith-based organizations— to reduce childhood obesity and promote healthy lifestyles[14].

Here in New Jersey, local government leaders are taking it a step further by participating in the Mayors Wellness Campaign. The mission of the Mayors Wellness Campaign is to provide training and tools to mayors and other leaders to help “equip mayors and other key leaders with the tools to develop and implement active-living initiatives in their communities with the ultimate goal of improving health and reducing the skyrocketing health care costs that come with the obesity problem in New Jersey”. In April of 2012, the Township of Maplewood in Essex County became the most recent municipality to sign a resolution committing to a community-wide wellness campaign[15]. 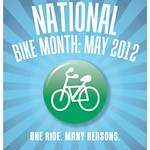 In addition to wellness campaigns, bicycle rodeos, Bike to Work Day, bicycle ambassador programs (E.g. NJ AIM), and “cash out” options for employee parking, are all examples of ways to promote bicycling in communities, schools, and workplaces. Furthermore, the month of May is Bike Month sponsored by the League of American Bicyclists, which exists to increase bicycling within communities by coordinating events nationwide.

The relationship between bicycling, walking and public health is clear; promoting bicycle and pedestrian friendly policies can help achieve public health and non-motorized transportation goals. The connection between public health and active transportation offers a natural opportunity for potential collaboration with new partners, as the integration of public health, public policy, and transportation planning can yield positive results across disciplines. Complete Street policies, Safe Routes to School programs, improving access for workplace and home storage of bicycles, bike share programs, and infrastructure improvements that include bike lanes, bike parking, and tune-up stations, are examples of supportive policy actions that are currently being implemented in communities across the nation and in New Jersey. Investing in bicycling programs and infrastructure in New Jersey can help fight the obesity epidemic in communities across the state.

[7] Data from the President’s Council on Physical Fitness and Sports available at https://www.fitness.gov/obesity_america.htm

[13] This increase (roughly one percentage point) occurs even after controlling for days of rain, automobile ownership and state spending on walking and cycling. From the article, Dill, J., Carr, T. “Bicycle Commuting and Facilities in Major US Cities: If you Build Them, Commuters will Use Them-Another Look” Transportation Resource Record 1828 (2003) 116–123.