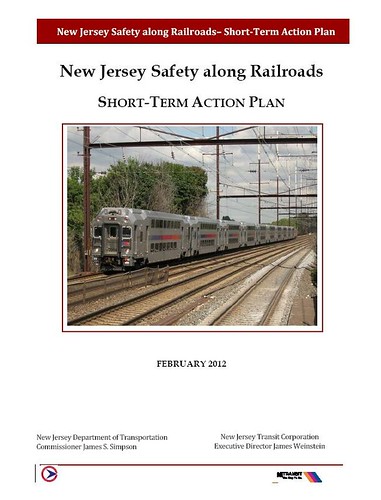 The announcement caps three months of work by a Safety Along Railroads Leadership Oversight Committee and its three subcommittees that were formed in the wake of two incidents in October, 2011.  Those incidents, in Wayne on October 2  and in Garfield on October 3, claimed the lives of three teenagers and injured a fourth.

The report released today, which builds on a solid foundation of existing NJ TRANSIT safety programs, represents the work of dozens of federal and state officials and other stakeholders.  They explored options and developed an action plan that has been endorsed by NJDOT and NJ TRANSIT.

“Nothing at NJDOT or NJ TRANSIT matches the importance of safeguarding the lives of those who use New Jersey’s extensive, multi-modal transportation system,” Simpson said.  “We dedicate the efforts that will spring from this safety initiative to all who have endured tragedy along our railroads and to all who we will protect in the future.”

“It’s a great privilege to partner with Commissioner Simpson and the committee and subcommittee members who brought energy, focus and determination to this critical safety initiative,” said NJ TRANSIT Executive Director James Weinstein.  “Our collective efforts will build upon NJ TRANSIT’s extensive safety programs and will help create a safer future for our customers, our employees and for all New Jersey residents and visitors.”

Recommendations contained in the report primarily revolve around three complimentary safety spheres:  engineering, education and enforcement.  Twelve high-priority action items are proposed to be carried out or at least started within a year or, in some cases, much sooner.

The report also lists a dozen safety efforts that NJ TRANSIT has started or committed to since the formation of the oversight committee in November.

Among engineering action items is a commitment to launch a pilot program to evaluate the effectiveness of gate skirts and “Second Train Coming” warning signs.

Gate skirts create a barrier below an activated grade-crossing gate to deter pedestrians from ducking under.  “Second Train Coming” signs are designed to provide an additional warning to pedestrians to remain behind gates even after the one train they may be aware of has left the station. This pilot program will be carried out by the Volpe National Transportation Systems Center under an agreement with the Federal Railroad Administration.

NJDOT and NJ TRANSIT will deploy Dynamic Message Signs, rotating them among high-risk grade-crossing locations, to remind pedestrians of the importance of obeying warning and safety devices.

The two agencies will also expand the Diagnostic Team program to proactively assess conditions at crossings and stations, in addition to responding to crash incidents.

NJ TRANSIT has already begun to re-tool its Rail School Safety Program that it presents to schools and community groups.  The new age-appropriate programs now include compelling accounts from police officers and train engineers who have been involved in or have responded to trespasser-related incidents on the NJ TRANSIT railway system.

To expand the reach of this program and complement the efforts of NJ TRANSIT staff, members of statewide Transportation Management Associations will be trained as presenters of the safety message to school and community groups.

The report also calls for the development and implementation of a public education campaign that includes new Public Service Announcements, the increased use of social media and other virtual and physical formats designed to spread essential safety information to targeted audiences.

NJ TRANSIT will also work with the Motor Vehicle Commission to insert rail and grade-crossing safety information in the driver’s manual and to include at least one rail safety question on driver’s license written tests.

Additional educational and safety signs will be installed at targeted rail stations to provide basic information about laws that prohibit trespassing or ignoring warning devices.

NJ TRANSIT police will conduct high-profile enforcement actions at targeted high-risk locations, to enforce the laws that prohibit ducking under crossing gates or other acts to disregard warning devices.  Efforts will be made to time these enforcement actions to coincide with Public Service Announcements as a way to amplify the safety message.