In 2009, the New Jersey Department of Transportation adopted a Complete Streets policy which defined a complete street as one designed to provide safe access for all users by implementing a comprehensive integrated multi-modal network of transportation options. The benefits include increased safety for all users, connections between origins and destinations, and the promotion of healthier and more livable communities. Since the policy’s adoption, Complete Streets has built momentum throughout the state. As of December 2017, 8 counties and 139 municipalities have followed the lead and adopted their own local Complete Streets policy.

The Bicycle and Pedestrian Resource Center, part of the Alan M. Voorhees Transportation Center at Rutgers University, has developed a series of case studies intended to highlight Complete Streets leaders in New Jersey. The purpose of this report, funded by the New Jersey Department of Transportation, is to highlight the Complete Streets policy and implementation history for the Town of Morristown. The report is based on findings provided in interviews with Council President Stefan Armington, Town Planner Phil Abramson, and Rebecca Karger from Bike and Walk Morristown.

Morristown is a historical municipality that has seen heightened interest in new residential development thanks to its compact, walkable nature. However, regional traffic patterns have resulted in congestion, which in turn has led to drivers speeding through neighborhoods in an attempt to avoid traffic. Even before the term “Complete Streets” was coined, the town was taking steps to calm traffic, encourage walking, and make bicycling safer. The town recognizes that mobility and development are closely tied, and was one of the first municipalities in the state to join the Transit Village program and to adopt a Complete Streets Policy. These steps have ensured that as Morristown continues to attract new development, the pedestrian-friendly environment Morristown is known for is constantly improved.

The report begins with a summary of key findings followed by background information including historical, demographic, transportation, and land use data collected from Census documents. This information is essential in understanding the context of Complete Streets in Morristown. The report then explores the history of the municipal Complete Streets policy, including how the policy was developed. The report looks at multiple aspects of Complete Streets, such as new residential developments, an attractive plaza, traffic calming, bicycling, and advocacy. The report looks at relationships with partners, and then concludes with recommendations suggested by Morristown. 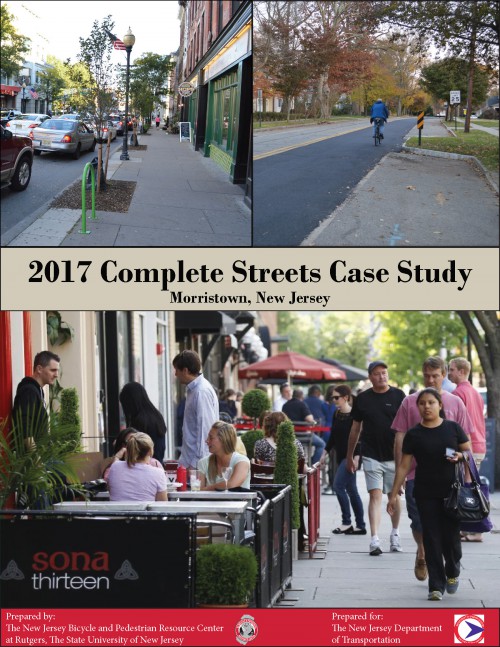