This report identifies a number of potential infrastructure improvements to realize a safe and attractive multi-use trail connecting Wolcott Park, Wampum Lake Memorial Park, and the F. Bliss Price Arboretum and Wildlife Sanctuary in the Borough of Eatontown, New Jersey. The recommendations in this report were developed through the North Jersey Transportation Planning Authority (NJTPA)’s Complete Streets Technical Assistance (CSTA) Program. Eatontown was one of nine communities selected to receive up to $10,000 in technical assistance through the program. The Borough of Eatontown requested assistance developing a bicycle and pedestrian greenway connecting the three parks.

The recommendations in this report are accompanied by conceptual plans and images that show what a completed project could look like (Figure 1). These images may be used by municipal officials to facilitate discussions with the public and to assist in moving the project from concept to reality. In addition, reference photos exemplify similar improvements made elsewhere in New Jersey and around the country.

Some sections of the proposed route will require significant investments. The conceptualizations included in this report will help to build support for those improvements. Other concepts can be built quickly by the municipality through relatively inexpensive demonstration projects, which can serve as temporary improvements until more permanent upgrades can be made. The concepts and reference images illustrate how a temporary intervention could function. The appendix provides additional resources on short-term implementation strategies. While the conceptualizations focus on a specific route, many of the ideas can be applied to other municipal- owned roads in Eatontown.

In addition to the CSTA Program, the NJTPA also has a pedestrian safety campaign, Street Smart NJ, which communities can participate in to improve safety. Street Smart NJ aims to raise awareness of New Jersey’s pedestrian-related laws and change the behaviors that contribute to pedestrian-vehicle crashes. Additional information is included in the appendices. 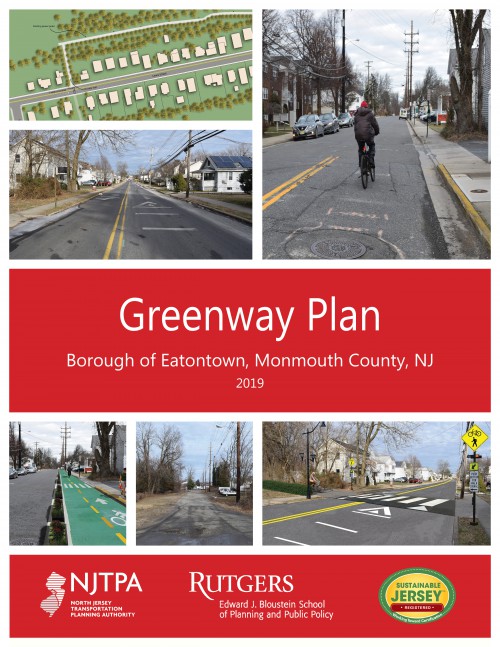