The Pedestrian Hybrid Beacon (PHB) is a high-intensity, pedestrian-activated signal placed at a midblock or intersection crosswalk. It was introduced into the MUTCD in 2009 (Fitzpatrick et al., 2019), and since then, its popularity has increased throughout the country, including in New Jersey. Concerns have been raised about driver and pedestrian comprehension of the PHB based on previous research and its recent introduction in New Jersey.

The main focus of this report is to evaluate the effectiveness of PHB signals at high-risk locations in the state of New Jersey through an analysis of observational data. In this analysis, the effectiveness of the PHB signal was evaluated by defining specific measures of effectiveness based on the compliance and non-compliance behavior of pedestrians and motorists during each phase of the signal. Three locations were selected for further analysis by considering factors such as the number of pedestrian crossings, different community types (e.g., urban, suburban, campus area), and diverse demographics. Video data were collected for the three selected locations, and the defined measures of effectiveness were manually recorded by monitoring the video data.

In addition, this report aims to measure public awareness and comprehension of PHB signals. To achieve this, a web-based behavioral survey was developed and distributed to 79,567 randomly selected email addresses in ten cities, including both those with and without PHBs installed. In the survey, respondents were asked whether they had heard of or seen a PHB in the past and about their level of understanding of each phase of the PHB system (after being provided with a description of each signal phase), including which phases allow motorists and pedestrians to proceed. The survey also asked respondents about their demographic, transportation, and employment information, as well as whether they believed taking the survey increased their understanding of the PHB.

Overall, the observational analysis indicated a high rate of pedestrians who jaywalked, specifically in Morristown (Location #3). The study also revealed that a varying percentage of motorists crossed during the pedestrian crossing phase at two locations. The behavioral analysis demonstrated that despite the increasing popularity of the PHB in New Jersey, the majority of respondents are still unfamiliar with the PHB signal and its phases. The survey results also showed that simple diagrams and explanations distributed in an online format can effectively increase public understanding of the PHB. 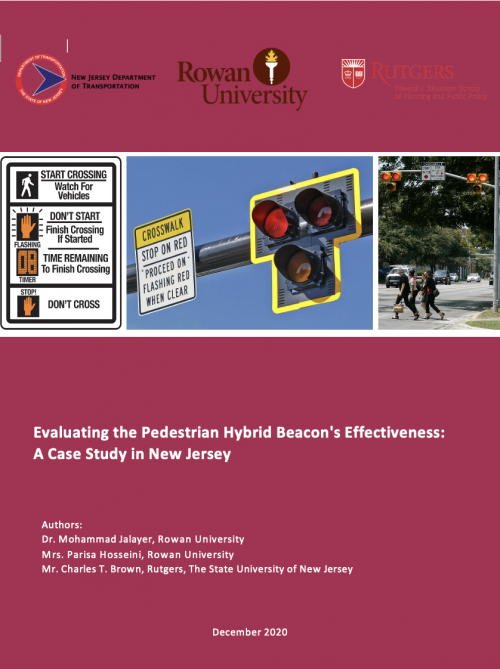