In 2014, the Alan M. Voorhees Transportation Center undertook a study to benchmark the state of local bicycling investment in New Jersey municipalities for the years 2013-2014. The New Jersey Bicycling Benchmarking Report reviews the state of bicycle infrastructure, policies, programs, and safety in New Jersey. It relies primarily on 2013 and 2014 data provided by select municipalities through an extensive survey; secondary data from online resources was also used.

This report highlights many of the benefits that come from the implementation of modern bicycle infrastructure and policies, and will inspire municipalities across New Jersey to critically examine their support of bicycling in comparison with that of their peers.

As the first ever benchmarking report for New Jersey, significant effort was undertaken to bring transparency to information previously only available within municipal halls. Sixty municipalities were surveyed to catalog their level of spending on bicycling, their bicycle policies, and their implementation of programs such as Safe Routes to Schools and Complete Streets, among many other bicycle related metrics.

The report also highlights ten municipalities that are exemplary in their investment in a safe and convenient bicycling environment. The notable communities identified in the report are (in alphabetical order):

More information on the policies and investments that make these municipalities notable is available in the report.

Drawing inspiration from the national Benchmarking Report created by the Alliance for Biking and Walking, this report highlights information that is valuable to municipalities, county governments, the New Jersey Department of Transportation, bicycle advocates, policy-makers, and New Jersey residents.

Findings of the report include:

Please read the full report for additional information and statistics. 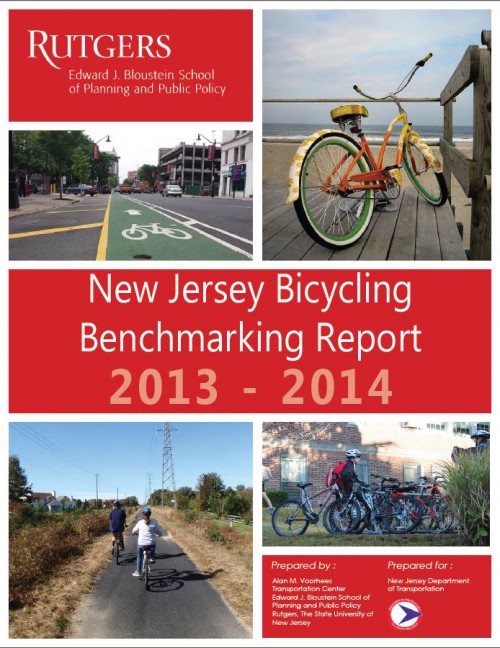