Bicycle patrols have become an increasingly popular choice for police departments across the United States, including New Jersey. By creating closer and more frequent interaction with law enforcement, the public becomes more familiar with the officers responsible for their safety. Bicycle patrols emerged in the late 1980s and early 1990s as an alternative to typical patrolling methods.

According to the International Police Mountain Bike Association (IPMBA,) bicycle patrols bridge the gap between automobiles and foot patrols[1]. Unlike squad car patrols, officers on bikes can better use all of their senses, including smell and hearing, to detect suspicious activity and prevent crime. Additionally, a police officer on bike patrol travels twice as fast as an officer on foot, yet exerts only a third to a fifth of the amount of energy[2]. Bicycles offer a cost advantage as well.  They are substantially less expensive to purchase and maintain than a patrol car and often are donated. The bicycle’s advantages, including the ability to maneuver more easily and travel through small spaces and congested areas, can make a world of difference in enhancing the safety and health of a community and its quality of life.

Bicycle patrols are most commonly associated with congested urban areas. However, bicycle patrols can be effective in urban, suburban and rural neighborhoods alike. Bicycles are very quiet, allowing officers to approach a suspicious or potentially dangerous situation virtually unnoticed. In addition, the IPMBA reports that “citizens are more likely to approach a bike patrol officer than even a neighborhood beat officer, optimizing community oriented or problem oriented policing efforts.”[3] While the foundation of a bicycle patrol is similar from place to place, functions can vary and often cater to the needs of the individual community. 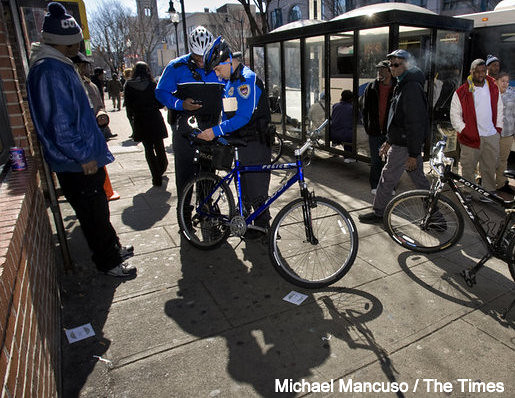 Many communities throughout New Jersey have established bicycle patrol units to enhance relationships with local residents and provide a degree of flexibility not experienced in traditional automobile patrols. Knowing this, the Trenton Police Department has revived their bicycle unit, which was disbanded over nine years ago. Their new patrols will cover the downtown Trenton area between the hours of 8 a.m. and 6 p.m. where residents and merchants have already had a positive response to their presence. Although not an exhaustive list, the following table identifies some New Jersey municipalities that have active bicycle patrols according to their Department websites.

Two of these patrol units – Ocean City and Colts Neck – have been highlighted below.

While highway and traffic control is best accomplished by officers in cars, patrolling by bicycle has been a highly effective method for community policing. Ocean City Police Lt. Steve Ang runs the city’s bike unit and finds the patrols have been successful in “breaking down barriers.” With a 2.5-mile boardwalk to police that is heavily trafficked by tourists and residents alike, bicycle patrols have allowed for easy navigation and improved interaction with both tourists and locals. Officers on bikes have been well received by the community and officers are often sought out by residents. “The increased visibility and perception of officers by the community has really benefitted us,” says Ang.

In addition to the increased public perception, the bike patrol has also become a desirable assignment for officers. Lt Ang has noticed that bike patrol, which consists of one sergeant and three officers, is a duty that officers vie for and rarely complain about. Originally financed in part by a community policing grant, the bike patrol’s proven effectiveness and popularity has resulted in the unit’s continuation through the department’s regular operating budget. 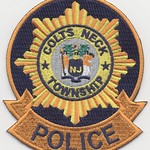 While bike patrols are most common in more densely populated areas, Sgt. Maxwell of the Colts Neck Police Department feels that the benefits of bicycle patrols can be evident in all types of communities throughout New Jersey. In a relatively rural municipality such as Colts Neck, where it is not practical to run daily bicycle details, bike patrols have proven very beneficial during special events. Colts Neck assigns two officers to bicycle patrols during special events, allowing the public to better interact with their officers. Sgt. Maxwell has noticed local residents are more open because officers seem more approachable when on bicycles.

While bicycle detail is less frequent in Colts Neck than in Ocean City, it is still a desired assignment for many officers. Officers have to request bicycle detail and complete additional training prior to beginning patrols. Because officers are travelling at a speed that allows people to interact more easily with them, relationships with the public and job tasks vary from those of traditional cruiser details.

“The protection offered is different,” said Maxwell. “While officers on bicycles cannot transport individuals if they get arrested or use radar to flag speeding automobiles, the community policing dimension of bicycle patrols allows for better relationships to be formed between the police department and the public.” In Colts Neck, the bikes used by the bicycle patrol have been donated by a local homeowners association, demonstrating the importance of the patrol to local residents.

The use of bicycle patrols offer advantages in visibility, mobility, and interaction with the community.  While dense urban environments seem like the ideal location to institute an effective patrol, experiences in New Jersey have shown that bicycle patrols can offer benefits in tourist communities, such as Ocean City, and in more rural areas, such as Colts Neck. Regardless of their built environment, communities throughout New Jersey can rally around the notion of community policing through bicycle patrols as a way to enhance relationships between the police and local residents. For more information on bicycle patrols throughout New Jersey and the nation, visit the International Police Mountain Bike Association at https://www.ipmba.org.