Traffic crashes are one of the leading causes of preventable deaths in the United States. Nearly 20% of these fatalities include pedestrians or bicyclists who were hit and killed. The 2022 Dangerous by Design report shows there has been a 62-percent increase in pedestrian fatalities since they began to rise in 2009 following years of improvement. Despite these alarming figures, there has not been a consistent, widespread public call for action to improve road safety.

One potential explanation for the lack of public concern is how these traffic crashes are covered in the media. Research has regularly shown that news coverage affects public attitudes significantly. According to studies, U.S. media outlets frequently use problematic, passive language (for instance, stating that “a bicyclist was struck” rather than “a driver hit a bicyclist”), accuse pedestrians of being at fault before blaming drivers, and portray crashes as unfortunate and isolated incidents rather than as part of a consistent pattern affecting the nation. In addition, many journalists still refer to crashes as “accidents” more than six years after the Associated Press initially cautioned them against doing so, furthering the public’s misconception that traffic fatalities cannot be averted. This method of reporting is likely a factor in the relatively low public outrage around the deaths of pedestrians and cyclists. By slightly changing their reporting, journalists can break these tendencies. Even small adjustments in writing style could boost public pressure to lower traffic fatalities by alerting people to the connections between what at first glance appear to be isolated incidents.

In an effort to publish crash reports as quickly as possible, many busy journalists rely exclusively on police crash reports. Additionally, many police agencies use social media platforms, like Facebook and Twitter, to interact directly with the general public. This means that even if press coverage improved, much of the public would receive inadequate coverage. To improve the public’s experience with information about traffic collisions, it seems sensible to start with the official source, that is, the police press releases.

An innovative pilot study was conducted by Associate Professor Kelcie Ralph, Tara Goddard, Calvin Thigpen, and Raymond Davis to reshape the language of the police press releases that journalists rely on for their coverage. More and more individuals are getting their crash information straight from the police. Therefore, improving the language used in police press releases may have the twofold benefits of improving both news coverage and direct public communications from police departments.

The researchers created a brief training program specifically for police officers, after which they sought the officers’ opinions. Since it was a test initiative, the number of officers offering feedback was small. The police officers were presented with nine recommendations during the training (shown in Figure 1) and were asked for their opinions. 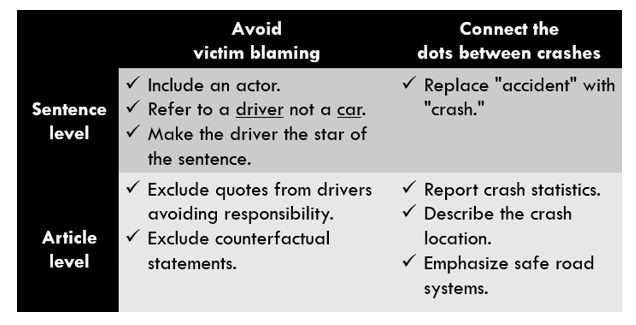 Figure 2 displays the survey’s findings. The majority of participants chose four recommendations which included using object-based language, eliminating the use of the word “accident,” omitting exculpatory quotes from drivers and including details about the crash site.

The researchers amended their suggestions in light of the survey results and conversations with police, legal experts, and media (see the final version here). The following are five crucial recommendations provided by the researchers to improve police press releases: