The 2010 ADA Standards for Accessible Design: What’s New and How Will the Changes Impact the Pedestrian Environment? 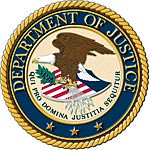 In 1991 the Department of Justice adopted the Americans with Disabilities Act (ADA) Standards for Accessible Design. These standards required newly constructed and renovated places of public accommodation and commercial use to be designed in ways that prohibited discrimination on the basis of disability. These principles also required consistency with design guidelines published by the U.S. Architectural and Transportation Barriers Compliance Board (Access Board), an independent federal agency that develops and maintains accessible design criteria.  Nearly 20 years later, the Department of Justice released the 2010 ADA Standards for Accessible Design, which includes revised design criteria that intend to enhance accessibility for individuals with disabilities. Many of the changes are minor and certain design guidelines are relaxed to help developers more easily comply with the updated standards. However, the revision aims to encourage the formation of a more accessible built environment.

Structure of the Standards

The newly updated 2010 standards are defined by three components. The first provides revised regulations for Title II entities, which include federal, state, and local government bodies. The affected properties include those that are publicly-owned, such as government buildings, social service centers, train stations, and public right-of-ways.  The second section provides regulations for public accommodations and commercial facilities, which are considered Title III entities and generally fall in the private realm. The updated document also incorporates chapters of the Access Board’s 2004 Americans with Disabilities Act/ Architectural Barriers Act Accessibility Guidelines, which contain scoping and technical requirements for various sites, facilities, buildings, and design elements that maximize accessibility for individuals with disabilities. Public and private entities are required to follow standards set in the initial regulations section as well as the design guidelines in the 2004 Americans with Disabilities Act Guidelines (ADAAG) section.

Transition to the 2010 Standards

The 1991 ADA standards went into effect on January 26, 1992, six months after the effective date of rule. Although this transitional phase was appropriate for compliance to the 1991 requirements, it was determined that this period of time would not be adequate for the 2010 Standards as many projects were already in design and permitting phasing for compliance to the previous standards. Therefore, it was concluded that compliancy with the 2010 standards for new construction and alterations would not be required until 18 months after the final rule, which was March 15, 2011. However, if either a public or private entity chose to adhere to the 2010 standards before the compliance date, they had to comply solely with either the 2010 or 1991 standards and not aspects of both.  The revised regulations also addressed how to deal with facilities that were designed and constructed to meet the 1991 standards, some of which are now outdated. In order to prevent these Title II and III entities from having to face the economic costs of implementing the design requirements for a second time, a safe harbor ruling allows facilities that met the 1991 ADA Standards to remain compliant if unaltered. Thus, public and private entities are not required to retrofit these elements to reflect the 2010 changes unless it is being affected by rehabilitation or renovation.

ADA Standards impact and alter the built environment. The intention of these design regulations is to accommodate those with disabilities; however, all pedestrians are affected by the standards, even if they are not aware of the particular design elements. The new standards will continue to alter the pedestrian setting, particularly regarding slopes, floor and ground surfaces, detectable warning surfaces, site accessibility and entrances, and handrails. Some of the updated standards are more relaxed than the originals.

The revision of the standards for slopes along accessible routes is a minor, technical change. The 1991 requirement was that a cross slope of a walking surface not to exceed 1:50. The 2010 requirement allows an increase in the cross slopes of walking surfaces by raising the maximum to 1:48, which is marginally steeper. Some critics recommended increasing the slope more than this in order to help prevent the pooling of water in the imperfections of concrete surfaces; however, it was determined that in most situations this new cross slope would adequately provide for drainage.

The 1991 and 2010 Standards both require floor or ground surfaces to be stable, firm, and slip-resistant. Slip resistance is especially of importance as it is necessary to keep shoe heels and crutch tips from sliding on walking surfaces. The 1991 Standards recommend that ground surfaces along accessible routes have a static coefficient of friction of 0.6, which is considered a close approximation of the actual dynamic coefficient of friction. Further, this acceptable value was determined to be sufficient for persons with disabilities by the Access Board upon completing research on the topic. The updated 2010 requirements only state that a slip resistant surface “provides sufficient frictional counterforce to the forces exerted in walking to permit safe ambulation.” [i] Several comments were received that suggested the Department of Justice implement an American Society for Testing and Materials (ASTM) standard to assess slip resistance, however, it was concluded that there was no generally accepted method of testing the slip-resistance of a walking surface in all conditions. Thus, a previously acceptable method of determining reliability of floor and ground surfaces was eliminated for a more general interpretation due to concerns about the accuracy of the measurement.

Requirements for detectable warnings have also been modified with the 2010 revision. A detectable warning surface (DWS) is rectangular pattern of raised truncated domes which are placed along curb ramps and transit platform edges to help visually impaired recognize potential hazards. Some technical specifications for the truncated domes changed with the 2010 revision. The 2010 Standards expand on the standards set in 1991 by setting maximum as well as minimum dimensions for dome size and dome spacing. The original standards specified that the domes should have a diameter of 0.9 inches and a center-to-center spacing of 2.35 inches whereas the new design standards identify a base diameter ranging from 0.9 inches to 1.4 inches and a spacing of 1.6 to and 2.4 inches. Additionally, the updated requirements specify that the top diameter of 50 to 65 percent of the base diameter. The height of the domes remains unchanged at 0.2 inches. The biggest change regarding detectable warning surfaces, however, involves where they are required. The 2001 ADA guidelines required detectable warning surfaces on curb ramps, in front of doors to hazardous areas, at dangerous vehicular areas, on transit platforms, and at the edges of reflecting pools. The revised standards only require detectable warning surfaces on curb ramps in the public right-of-way and on transit platform edges. Thus, many privately operated facilities are now exempt from needing to implement these surfaces, which could create hazards for individuals with impaired vision. 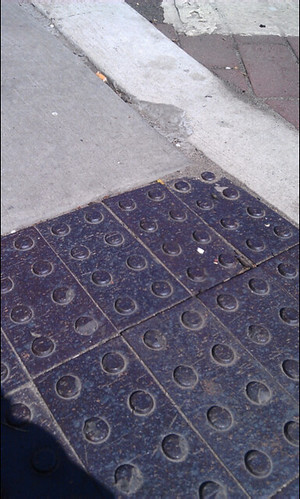 The two images display some of the changes in the design standards for DWSs. The image on the right depicts the 2010 design, which features truncated domes that are smaller on top than at their base.

The Standards for public entrances have also been modified in the 2010 update. The 1991 Standards required at least 50% of public entrances to be accessible whereas the 2010 Standards increased this requirement to 60%. This change is intended only to have an effect on large facilities as the 10% increase will not affect buildings with few entrances. Further, if an accessible public entrance serves several arrival points, both the 1991 and 2010 Standards require the provision at least one accessible route to the entrance from  each arrival point, which include parking spaces, passenger loading zones, public streets and sidewalks, and public transportation stops. Therefore, if facility is required to increase the number of accessible entrances, they may have to provide additional accessible routes.

Access aisles are required by the 2010 standards to connect accessible parking spaces with accessible routes leading to entrances. Criticism of this new standard has been received as it permits individuals with disabilities to travel on routes that are shared with moving vehicles. However, the Department of Justice believes that not all parking facilities are able to provide separate pedestrian paths and therefore these standards provide designers with the ability to appropriately locate accessible routes and entrances. 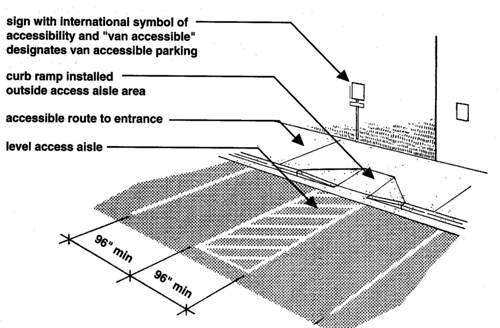 Any newly constructed or renovated facilities—including many public works projects—must comply with the 2010 ADA Design Standards. For example, construction at the Short Hills train station will involve widening sidewalk and providing ADA compliant handicap accessible ramps on Chatham Street [ii]. Additionally, the City of Wildwood was recently awarded a Small Cities Community Block Grant for $400,000, which will be used to construct ADA compliant pedestrian and bike ramps from the beach to the boardwalk at Cresse Avenue. [iii] Municipalities however must  be careful to adhere to ADA guidelines when constructing such facilities; a lawsuit was filed against Hightstown Borough by two advocates for the disabled who claimed that the park is inaccessible for those with disabilities [iv]. The park was recently renovated but failed to provide handicap-friendly benches and tables and constructed sidewalks and curbs that were not ADA compliant. Thus, it is important for private and public entities alike to consider the revised ADA guidelines when making improvements to ensure compliancy.

Image Courtesy of the San Francisco Dept. of Public Works

Adhering to the revised 2010 ADA Standards for Accessible Design should not inconvenience public and private organizations. Many of the existing standards remain unchanged and previously compliant facilities are relieved from the responsibility of updating their ADA infrastructure. Developers and designers are given more options when complying with the new changes as the requirements for slopes, walking surfaces, detectable warning surfaces, access aisles in parking garages, and handrails have been eased. Will these more relaxed standards have negative impacts on persons with disabilities? Or will they enable greater implementation of ADA Standards for Accessible Design? One year after the compliance date for the 2010 Standards and the answer remains unclear. The only thing that is certain is that pedestrian environments, both in the public and private realms, will be constructed in a slightly modified fashion than they were previously .