Bicycle Route Alternatives Between Overpeck County Park and the GWB (2019)

This report identifies three bicycle route alternatives between the George Washington Bridge (GWB) and Overpeck County Park in the boroughs of Leonia and Fort Lee, in Bergen County, New Jersey. Although the most direct alternative uses Fort Lee Road, its steep slopes make it challenging to all but the most experienced cyclists and its combination of high traffic volumes and right-of-way constraints present significant engineering challenges to the installation of bicycle infrastructure. Given the option, most bicyclists will be content to use longer northern or southern alternatives that have less traffic and fewer steep slopes. This report identifies a number of potential infrastructure improvements for each alternative that are intended
to make bicycling safer and easier. All of the potential treatments identified by this report require further evaluation from an engineering perspective.

The most significant obstacle to bicycling in the area is the presence of the Palisades cliff between Leonia and Fort Lee. The Palisades create steep slopes that are physically challenging and discomforting for most bicyclists, particularly novice cyclists. Additionally, the area is densely populated with limited space to expand roadways to create dedicated bicycle infrastructure. The lack of dedicated bicycle corridors forces bicyclists to share narrow roadways with heavy vehicular traffic. The three routes identified in this report allow bicyclists to cover the distance between the two  destinations while avoiding the steep slope as much as possible and minimizing the use of high-traffic corridors.

The Borough of Leonia submitted an application to the NJTPA’s competitive Complete Streets Technical Assistance grant program in 2018. The  borough was one of nine communities selected out of 17 applications to receive up to $10,000 in technical assistance. Leonia requested assistance with the development of a bicycle network plan, specifically with the goal of providing a safe bicycle route between Overpeck County Park and the GWB.

The GWB is the only way for bicyclists to access Manhattan from New Jersey under their own power. According to the Port Authority of New York and New Jersey, 345,000 bicyclists and 205,000 pedestrians crossed the span each year. Many of the bicyclists cross through Leonia on their way to or from Overpeck County Park, a popular 811-acre park. Leonia is also interested in promoting bicycling within the borough, as an alternative method for residents to access local businesses and services. In July 2018, the borough passed a complete streets policy as its first step in achieving this goal. 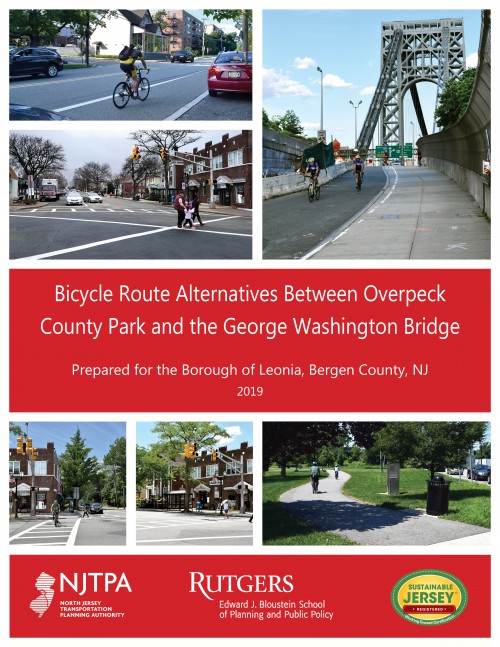