With inspiration from Sustainable Jersey’s Complete Streets action points, the Camden Green Team gathered to develop and promote the city’s Complete Streets policy, which passed in June 2013. Cooper’s Ferry Partnership (CFP) has a long-established commitment to, and financial support for, off-road trails which helped make the policy an easy sell. The Complete Streets policy in Camden allowed the municipality to systematically incorporate Complete Streets goals into each of their projects. Traffic calming initiatives combined with installation of pedestrian and bicyclist infrastructure have been successful in making Camden’s streets safer and more accessible for all users.

The Bicycle and Pedestrian Resource Center, part of the Alan M. Voorhees Transportation Center at Rutgers University, has developed a series of case studies intended to highlight Complete Streets leaders in New Jersey. The purpose of this report, funded by NJDOT, is to highlight Camden City’s Complete Streets policy and accomplishments. The report is based on findings provided in interviews with CFP staff Valeria Galarza, Meishka L. Mitchell, Kathy Cullen, and Linda Schneider. Speaking with CFP was important in the research stages of this report, as the non-profit is “committed to planning for the future of Camden and helping to implement the visions outlined in neighborhood plans throughout the city,” according to the CFP mission. Additionally, the organization plays an integral role in garnering grant funding for projects throughout the city, including the city’s many Complete Streets improvements.

The report begins with a summary of key findings followed by background information on historical, demographic, and land use data collected from county and Census documents. This information is essential to understanding the context of Complete Streets in Camden. The report then explores the history of the Camden Complete Streets policy, including how the policy was developed, promoted, and implemented. Successes and challenges are then highlighted for the benefit of other communities looking to implement Complete Streets and a number of next steps provide readers with insight into the policy’s future. This report will serve as a valuable tool for engineers, planners, elected officials, and advocates who want to move forward with Complete Streets in their communities. 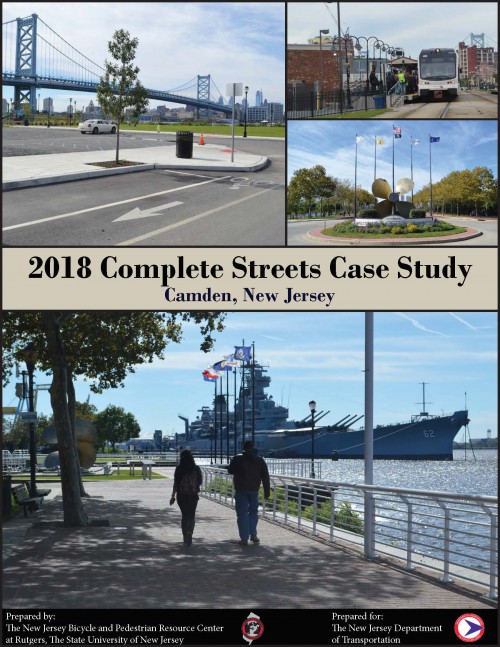