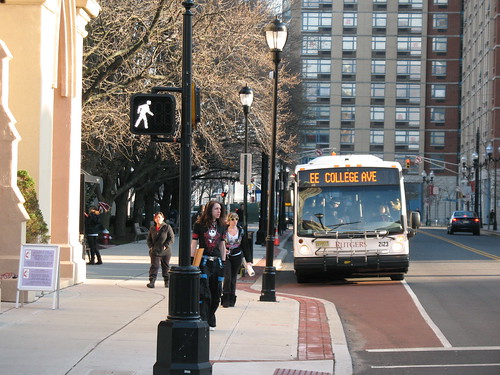 While residents of New Jersey can occasionally complain about road conditions for drivers, hazards for bicyclists and pedestrians have been historically overlooked.  This can be attributed to the fact that the street environment in our communities tends to be oriented towards automobiles, often resulting in unsafe conditions for other users. Through efforts by the New Jersey Department of Transportation (NJDOT) and the state’s eight Transportation Management Associations (TMA’s) this trend is beginning to change as more communities become aware of the need to accommodate all users of the roadway network.

With the passage of its Complete Streets Policy in December, 2009, the New Jersey Department of Transportation has sought to design roadways that will accommodate all users of the roadway network. Since then, the state has seen significant growth in local policies. Thirteen municipalities and one county now have a complete streets policy, with several communities seriously considering one of their own.  One organization leading the call for change is the National Complete Streets Coalition, a campaign based in Washington D.C. which has become the leading resource for all things related to complete streets.

Changing American Roadways for All Users

The National Complete Streets Coalition is a diverse body of stakeholders that includes planning, health, and transportation advocates seeking better bicycling and walking conditions on America’s roadways. According to Barbara McCann, executive director of the Compete Streets Coalition, “The benefit of a complete streets policy is it makes [bicycle and pedestrian accommodations] part of everyday transportation planning practice, taking into account the needs of everyone that will be using that right-of-way.”

Complete streets policies are an attempt to ensure rights-of-way will be safe and accessible for all users.  The elderly are among the neediest of road users.  According to the 2004 report, Aging Americans: Stranded Without Options, some 21 percent of U.S. senior citizens do not drive.    The importance of accommodating the elderly will continue to increase as the U.S. Census Bureau predicts one in five Americans will be over the age of 65 by the year 2050.

The policies are meant to change the way transportation agencies design roadways, which in many instances ignore non-motorists. To achieve that goal, transportation agencies must change how they define the term “road users.”  The Complete Streets Coalition defines users as “pedestrians, bicyclists, transit vehicles and users, and motorists, of all ages and abilities.”  Accepting that streets are the domain of all users will require public agencies to re-examine and alter their procedures and design manuals, retrain planners and engineers, and develop new ways to rate the ability of roads to accommodate all users.  Among the other benefits of complete streets policies cited by McCann is the construction of complete pedestrian networks. Incomplete sidewalk networks are one of the major reasons people choose not to walk.

The American Association of Retired Persons, the American Planning Association, The League of American Bicyclists, and the Institute of Transportation Engineers are just a few of the organizations that routinely fund and support the coalition’s work.  Through their work, the coalition serves as an excellent resource for communities looking to pursue a complete streets policy of their own. Earlier this year the coalition released a comprehensive report which analyzed the many complete streets policies adopted throughout the nation where the NJDOT policy was ranked number one in the nation.

One misconception of complete streets policies is that they will increase costs. McCann contends that concerns raised by some opponents that complete streets will increase roadway construction costs, are a myth.  She said that the higher costs result from fixing streets that were constructed improperly at the beginning. While improving poorly designed streets is certainly welcome, McCann said, the coalition focuses on promoting new complete streets. “Complete street(s) policy is about changing standards from here on out, about changing practice as things move forward, not about immediately retrofitting streets everywhere,” she said.

Complete Streets Policies Around the Nation 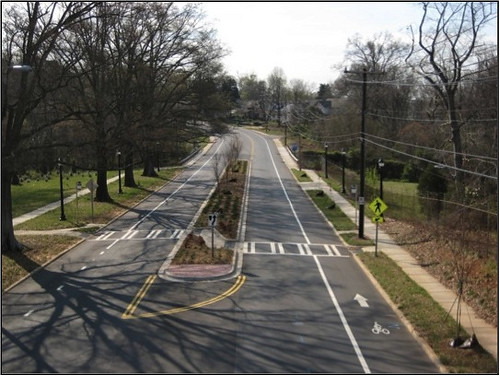 Charlotte adopted a complete streets policy that has drastically altered the way local transportation professionals go about daily business.  According to McCann, Charlotte transportation officials used the complete streets model unofficially for several years until it was officially approved in the fall of 2007.  The city developed a unique six-step planning process which improves its ability to accommodate all street users. Now, pedestrians and bicyclists are included in the planning process from the inception of a given project.

On the state level, the Illinois legislature enacted a complete streets policy into law.  Driving this development was the tragic death of a teenager who was attempting to bicycle across an auto-dominated bridge with no alternate accommodations. The state has since altered the bridge and Illinois’ new complete streets policy is meant to establish bicyclists and pedestrians as recognized road users in all future projects to prevent similar accidents from occurring.

Complete streets policies have had an effect on the Federal level as well.  In 2000, the Complete Streets Coalition provided policy guidance to the USDOT in its preparation of a design guide for the accommodation of pedestrian and bicycle travel. The coalition is now working with Congress to pass legislation that would ensure that federal transportation dollars would be used to promote complete streets. Through their efforts the Complete Streets Act of 2011 was introduced in the House of Representatives by Senator Tom Harkin, of Iowa on May 24, 2011. Over a dozen senators sponsored the legislation, with New Jersey Senator Robert Menendez co-sponsoring the legislation. 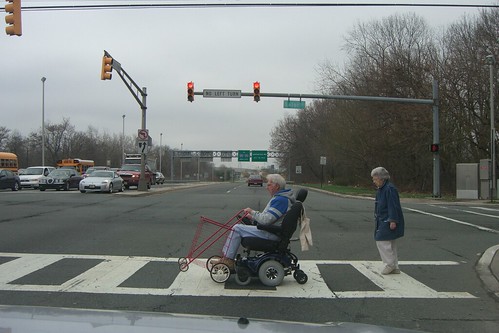 Complete Streets will help to make trips like this easier for the elderly.

The NJDOT policy, along with those being implemented around the state are trying to address the issue of mobility as our communities residents begin to grow older and require more options when it comes to transportation. Without safe accommodation for all road users, the hazardous conditions that currently exist for the most vulnerable of roadway users will continue to restrict mobility. Additionally, road users who simply want choices, such as the ability to walk, ride a bike, or use public transportation will be provided with a safe means of access to their destinations. 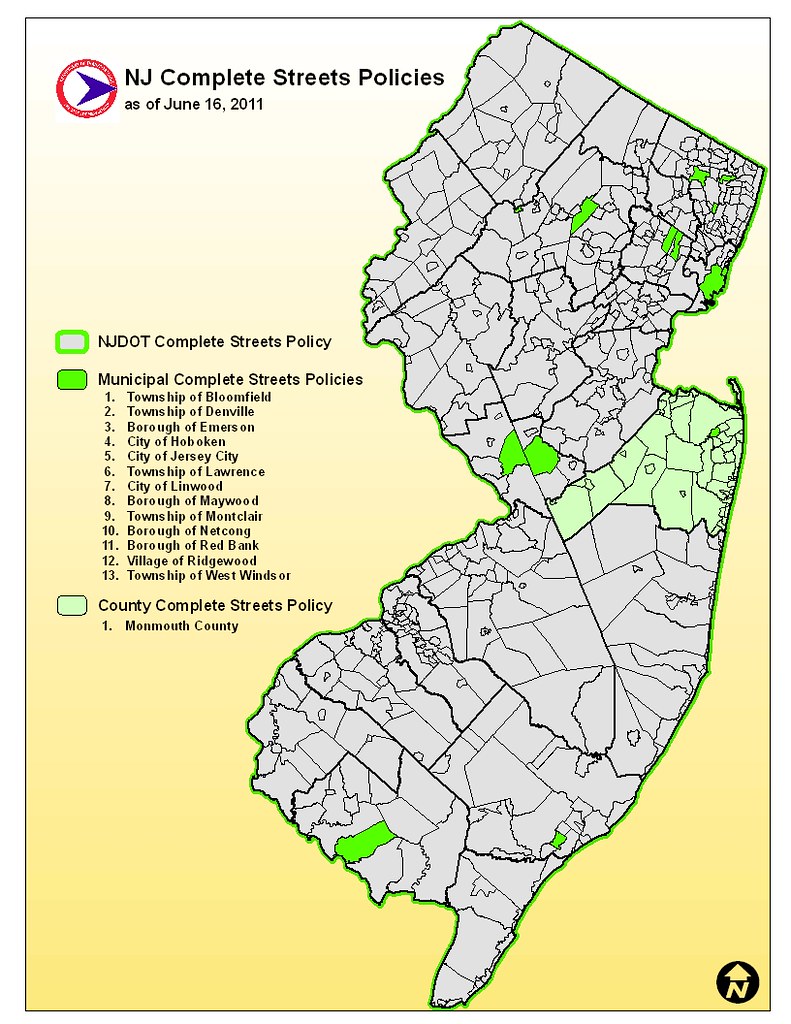 For more information, or if you have any comments on Complete Streets policies in New Jersey, please contact the Bicycle and Pedestrian Resource Center at bikeped@rci.rutgers.edu.