In 2018, the Township of Cranford and the Cranford Downtown Management Corporation (DMC) sought the expertise of the North Jersey Transportation Planning Authority (NJTPA)’s Complete Streets Technical Assistance (CSTA) Program to help redesign, reimagine, and reinvigorate Post Office Plaza. This report identifies four ways to expand and improve the plaza. Two preferred concepts were selected from the four proposals. Feedback from municipal stakeholders was used to develop two conceptualizations. The first shows how the plaza could look by closing Eastman Street and extended the pedestrian space into the former roadway. The second conceptualization shows how two plazas could be created by closing both Eastman Street and Miln Street and creating a new street in the middle (Figure 1).

The conceptualizations included in this report will help to build support for an enlarged and improved Post Office Plaza. Additionally, this report describes how Cranford could test out a plaza expansion by conducting a demonstration project to gather additional feedback. The concepts and reference images provide context to how a temporary project could be completed. The appendix provides additional resources on short-term implementation strategies.

While the conceptualizations focus on Post Office Plaza, the idea of expanded public space can be applied to other municipal-owned roads in Cranford. A key factor in making public plazas a success is creating a safe environment for people walking and biking in the area. In 2017, the Cranford partnered with EZ Ride transportation management association to implement the NJTPA’s pedestrian safety program, Street Smart NJ. The township may want to consider hosting Street Smart NJ campaigns annually to remind residents and visitors of the state’s pedestrian safety-related laws and what they can do to make Cranford roads safer for everyone. Additional Street Smart NJ campaign information, along with a list of potential funding resources, can also be found in the appendices. 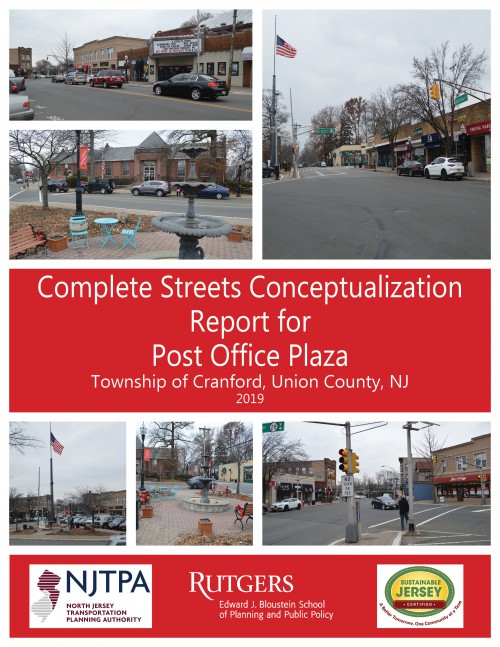