As a densely populated state, New Jersey has many urban roadways where closely-spaced intersections are controlled by “STOP” signs. Considering that most pedestrian activities are in dense, urban areas, this puts them at a greater risk of injury or death if drivers fail to stop as required. In New Jersey, stop-controlled intersections saw 30,754 collisions in 2018, which resulted in 41 fatalities and 8,651 injuries. While the majority of those crashes only involved motor-vehicles, 375 pedestrians and 308 bicyclists were injured. Previous studies have found that 70% of collisions at stop intersections are the result of driver violations, particularly failing to stop as required.

A variety of proven counter-measures exist to improve safety at intersections. Traffic signals, for example, can give pedestrians an exclusive phase to cross the street, but the installation of new signals is expensive and is not always warranted by traffic volumes. In some cases, traffic signals can result in higher crash rates than their stop-controlled counterparts. Roundabouts have been studied and built as another approach to improve safety at intersections by changing the roadway geometry, but they can require the acquisition of property to be built. The space requirement makes them difficult to build in established cities. Lower-cost countermeasures aim to decrease crashes at stop-controlled intersections by increasing the visibility of the stop sign. Some of these measures include adding advance signage, flashing LED lights, supplemental pavement markings, and rumble strips. However, many of these measures have been tested in rural areas or wide suburban arterial roadways, and may not be appropriate or effective in urban residential neighborhoods or downtown districts.

In 2018, NJBPRC researchers observed multiple New Jersey municipalities deploying portable stop signs to supplement existing stop signs at intersections, as a way to increase driver compliance. A review of the available literature indicated that this innovative method of traffic control had not been studied to understand its effectiveness. Additionally, the Federal Highway Administration (FHWA) has not approved of this technique as a way of improving safety at intersections. 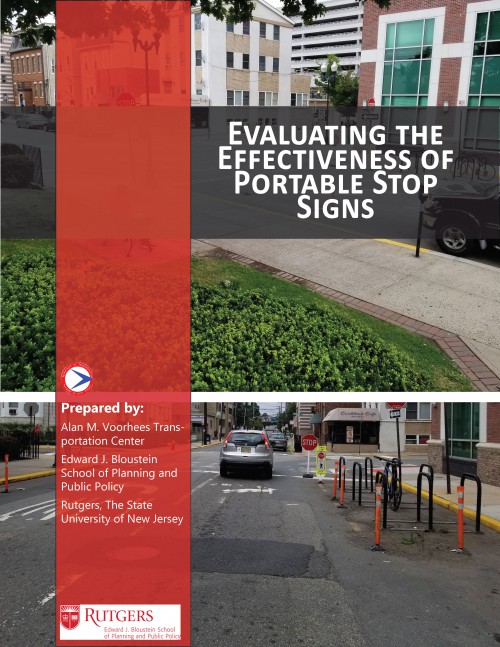