This report summarizes two pedestrian safety improvement projects in the Borough of Milltown, New Jersey that were completed through the North Jersey Transportation Planning Authority (NJTPA)’s Complete Streets Technical Assistance Program. Two demonstration projects were implemented on North Main Street at the intersections of Ford Avenue and Church Street with the goal of addressing the long crosswalk distances, parked cars obstructing the view of crosswalks and vehicles not stopping for people in the crosswalks. The NJTPA worked with the Alan M. Voorhees Transportation Center at Rutgers, the State University of New Jersey (VTC), and Sustainable Jersey (SJ) to provide technical assistance to the borough.

The Borough of Milltown was one of nine municipalities selected through the NJTPA’s competitive grant program, which provides up to $10,000 in technical assistance to support the Borough’s efforts to advance or implement complete streets, which are roads designed for all users, including vehicles, people walking, bicyclists and public transportation.

Milltown requested assistance with improving pedestrian safety by using a demonstration project — which is also referred to as tactical urbanism — to show the public what potential improvements could look like before implementing any permanent changes, such as using paint to demonstration how extending the curbs to shorten the crossing distance for pedestrians would work. This report provides insights into the demonstration planning process and provides several recommendations for continuing to promote complete streets in Milltown.

Because North Main Street is a county road, the Borough of Milltown partnered with Middlesex County on this project. The project team gathered stakeholder and public input as part of its analysis of pedestrian safety concerns on North Main Street. Following that analysis it recommended several improvements, many of which the county implemented, including installing higher visibility crosswalks and using paint, signage and plastic bollards to more clearly delineate areas where parking is prohibited. The bollards were placed on Ford Avenue and East Church Street. The project team also suggested placing bollards on North Main Street and using planters to narrow a large commercial driveway on that road, however these improvements were not yet in place at the time this report was published.

This report recommends completing the proposed improvements on North Main Street, developing a complete streets implementation plan, and identifying additional locations for similar pedestrian improvements. It suggests Milltown continue monitoring the changes to the intersections in order to identify opportunities to adjust the plans, including the addition of planters and other design elements. The report also recommends the municipality continue its work to improve pedestrian safety at other locations throughout the borough. Such projects should make use of the various tools provided through demonstration projects that help to ensure community-driven outcomes. Through all of this, the borough should continue its public outreach and work to spread awareness of complete streets goals. The long-term recommendations include installing pedestrian-activated flashing crossing signals at the East Church Street intersection.

The project proved to be successful in addressing pedestrian safety concerns in the community. Surveys collected after the project was implemented garnered positive feedback, including improved compliance with crosswalk laws, including vehicles stopping for pedestrians in the crossing. The findings of these surveys are detailed in the report.

The lessons learned from the demonstration projects can be applied to other municipal-owned roads in Milltown. Tools to guide this process can be found in the Methodology section of this report. Milltown has also taken advantage of another tool the NJTPA offers, Street Smart NJ, a pedestrian safety campaign that works to raise awareness of New Jersey’s pedestrian-related laws and change the behaviors that contribute to pedestrian-vehicle crashes. The Borough should continue its efforts to education drivers and pedestrians to improve road safety. Additional Street Smart NJ information and a list of potential funding resources are provided in the appendices of this report. 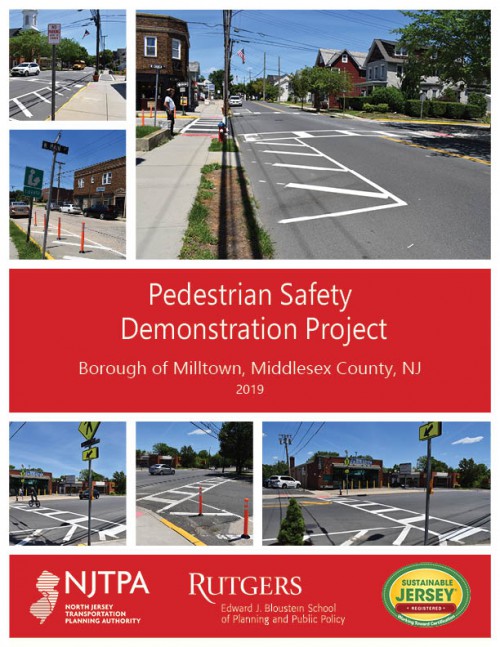