This report, produced by the NJ Bicycle and Pedestrian Resource Center, documents and evaluates the overall success and effectiveness of New Brunswick’s first Ciclovia, held on October 6, 2013. A Ciclovia is an event where roads are closed to motorized vehicle to create a free-form event that welcomes participants of all ages and abilities to enjoy physical activity and recreation in a safe and inclusive environment. Participants are invited to walk, run, bike, dance, and plan on public streets.

The central objectives of the report are two-fold: to understand changes in perception before and after the Ciclovia, and to document lessons learned to make future Ciclovias in New Brunswick and elsewhere in New Jersey more effective. The report also looks to see if the Ciclovia functioned as an effective tool for changing attitudes and perceptions surrounding New Brunswick and its neighborhoods, and examines how well the Ciclovia accomplished its goals. Those goals included increasing physical activity, strengthening community engagement, encouraging active transportation, reducing environmental impacts, promoting public spaces and resources, and supporting local businesses.

The report made several key findings, including that the New Brunswick Ciclovia was an overall success. Other findings included:

A key portion of the evaluation is a series of recommendations that address every phase of the Ciclovia, from the beginning of the planning stage, to outreach and marketing, on to how the event itself was held. Recommendations include increasing attendance with improved Spanish-language outreach, holding multiple Ciclovias a year, adding additional activity stations, and coordinating with more businesses and organizations prior to the event.

The recommendations and analysis can be valuable to other municipalities in New Jersey and around the country that are interested in forming their own Ciclovias. Many of those recommendations have already been carried out, as the Ciclovia organizing committee was advised of the recommendations as the report was being written. One recommendation, to hold multiple Ciclovias a year, was quickly adopted. In 2014, New Brunswick held three additional Ciclovias, which each event featuring many of the improvements highlighted in the report, ensuring that they ran smoothly. New Brunswick currently has plans to continue hosting Ciclovias into 2015 and beyond. 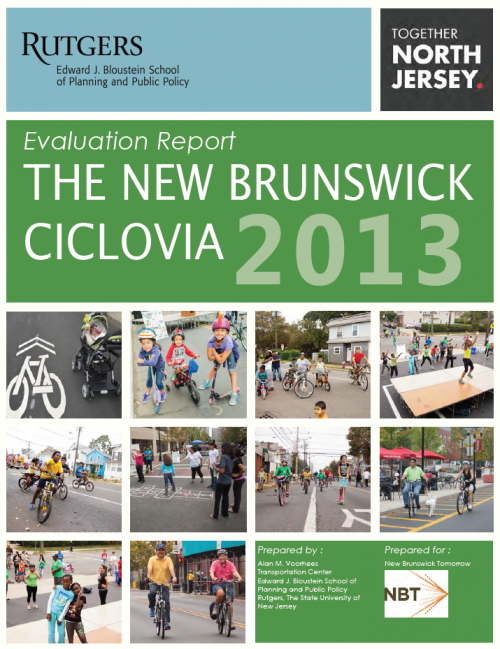